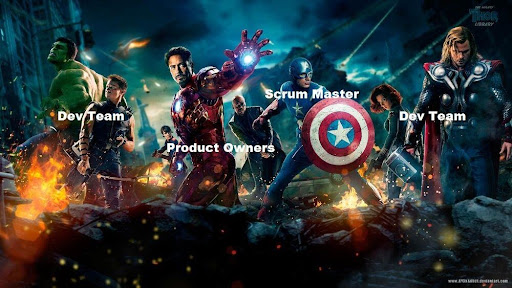 Pop culture can be effective in explaining a myriad of topics, including project management. Case in point: in my Cost and Value Management masters course, I once used the “Pinkasso” episode of “Pinky and The Brain” to explain Earned Value Management; that seemed to go over well (read: aced it!) with my professor at the time.

So, here’s hoping I can do the same here, albeit in a different universe. More specifically, Marvel’s Cinematic Universe, where I’d like to do a quick primer on Agile methodology of project management. Agile, like “Waterfall” project management, is concerned with cost, schedule, performance, and client acceptance. One of Agile’s key differentiators, however, is iterative delivery of capability whereas “Waterfall’s” bulk release strategy: small, standalone chunks delivered to the client over time that build upon each other for a final, fully realized deliverable.

Fans of the current movie iterations of Iron Man, Thor, Captain America, and other superheroes may recognize this approach: “Avengers: Endgame” took 22 movies (over three phases), and a lot of iterative storytelling, to get to that satisfying narrative finale. Marvel’s introductory phase alone spanned six films, capped off with the first Avengers team-up.

It’s these first six films that can serve as metaphors to some key Agile terms and processes. While there are several branded and marketed ways of providing Agile to the customer (Scaled Agile, Scrum Alliance, DevOps, etc.), they all rally around universal pillars, including:

So, adapting the above into my (ahem) “Marvel-ous” metaphor, Phase I’s slate of films would be Planning Increment 1: six movies or “sprints” that, upon completion of the PI, delivers the first “Avengers” film that feeds into the Marvel Cinematic Universe (MCU) Agile Release Train: Picking apart Sprint 1 above, the Scrum Master, Dev Teams, and Product Owners attend the grooming session prior to Sprint kickoff to determine the workload for Sprint 1. This workload, once agreed upon and prioritized, is put into Sprint 1’s backlog. Upon kickoff, the Dev Teams do their best superhero impression, knocking tasks out while the Scrum Master and Product Owners help the teams meet their goals. Once the Sprint ends, the MVP is available for demo and delivery to the Product Owner and stakeholders.

In this case, our MVP 1 is “Iron Man:” a standalone film that has iterative narrative hooks (Nick Fury recruiting a team of Earth’s mightiest heroes) that Sprint 2 will build from. Once accepted by the Product Owner and stakeholders, “Iron Man” can be delivered and integrated into the MCU Agile Release Train, while those aforementioned narrative hooks inform Sprint 2’s Grooming Session and backlog for the next MVP: “The Incredible Hulk.” If an MVP does not perform to standards, a future Sprint can be programmed for re-work or scope pivot, i.e., why we haven’t seen a sequel to “The Incredible Hulk.”

PI 1’s deliverable, “The Avengers,” is the cohesive result of the previous sprints that makes sense; you know who the heroes are and where they come from, you know who the villains are and what their motivations are, and in the spirit of iterative capability, you get the first glimpse of the big bad that will be narratively built on in subsequent PIs and thwarted in PI 3’s “Endgame” delivery, Thanos.

Like Thor’s hammer, Captain America’s shield, and Tony Stark’s Iron suits, Agile methodology is a great tool to wield to help clients achieve scope, budget, and schedule goals, one MVP (or Marvel movie) at a time.

Legacy to Cloud: How to Get Started

Cloud Technology: How to Find a Winning Strategy

The Evolution of Project Lifecycle Management

Ready for the Cloud? Move and Modernize Your Workloads with Dynamic Systems

What Does It Mean to Move to The Cloud

Legacy to Cloud: Who Is The Right Vendor?

CMMC: Where Does Your Company Fit In

Why Choose Dynamic Systems for Your Move from Legacy to Cloud

5 Best Practices for Federal IT Modernization

Enabling “Edge to Cloud” in Modern Federal IT

SPARC Server Migration: Here’s All You Need To Know

Best Practices in Moving, Storing, and Processing Data – From Edge to Cloud